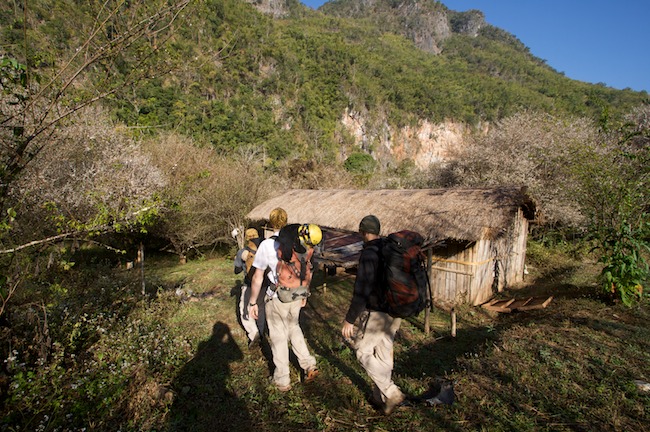 In January of this year, we found ourselves underground on multiple days exploring the depths of an unexplored cave passage in Northern Thailand.  Our goal during that expedition was to exit without any injuries and push the cave as far as we could.  When Marshall, Ted and I stood at the top of yet another 10 meter abseil (we were already 240 meters below the ground), we struggled with the reality that it was time to turn back.  We had run out of equipment and come to the agreed turn around time in order to exit before dark.  It was obvious there was more cave to explore, more to learn, and the potential of exiting in Burma.  We turned around, de-rigged our equipment and met our goals.  The trip was a success.

On the morning of April 11th at 10.00, we entered the monstrous river passage, climbed through mountains of bat guano and reached the first rappel.  Over the next three hours, we negotiated 8 meter, 21 meter, 40 meter and 60 meter rappels  until we reached the cave floor.  Meeting on the cave floor, we came to an agreement that we would return to the base of the rappels within 20 hours.  We each had a small mat to sleep on, food for 24 hours and water filtration.

Josh led the group through booming river passage and down into the lower slot canyon.  The cave was littered with fossils.  Stunning bands 6 inches think continued on both sides of the cave walls.  The cave was filled with incredible life.  We witnessed three different species of bats, incredibly rare cave leeches and also rare cave catfish.  Within three hours, we found ourselves at the top of the 10 meter waterfall that had turned us back three months earlier.

After a quick discussion, we rigged the rappel and pushed to the bottom of the waterfall.  We had no idea what was to come.  We were confident that no one had been in this cave before and now we were in virgin territory.  At the bottom of the rappel we saw something unexpected and amazing.  The catfish that we had been seeing throughout the cave were actually climbing the waterfall.  We snacked on tasty Thai treats at the base of the falls.  Feeling refreshed and energized, Taw and Phi took the lead and pushed the cave passage further.  We continued through the narrow canyon, the roof of the cave too high for our lights to shine.

As we continued to push around the corner we could hear bats…lots of bats.  The cave began to pinch out to smaller rooms and they were filled with hundreds of bats.  The bats were so confused they sometimes flew into us.  We continued through the first bat passage to the second until the cave pinched out and became too small to continue.  We returned back through the bat passage and found a dry flow stone bypass over the choke.  Continuing along a mud brick floor, we came to yet another rappel.  20 meters down was the promise of more cave passage.  It was 21.00 and we had been in the cave for more than twelve hours.  The energy of the group was fading and motivation was waning.  Ben and Josh had a chat and recognized the energy level and made the active decision to continue on in efforts to bring up the energy level.  Ben rappelled first.  It was a challenging rappel with slippery mud surfaces and difficult edges to negotiate.  Ben, Taw, Phi, Kat and Josh all continued to the bottom and pushed cave passage further.

200 meters beyond the bottom of the rappel, we hit the end of the trip.  The water flow pinched out and the mud flow hit the base of a vertical wall.  One of the most challenging parts of caving is accepting the fact that sometimes there is no way out except to turn around.  This was one of those moments.  We took a group photograph at the base of the wall and began the ascent back up the ropes to our mud floor campsite 250 meters below the ground.  It was a difficult sleep as the temperature was about 20 degrees celsius.  We slept from midnight until 07.00 on the morning of the 12th.  After a light breakfast, we began the trek back to the base of the rappels.  On the way out, we explored side passages and saw stunning stalactites, stalagmites, flow stones, crystal pools and volcanites (volcano-like mud formations in the floor:  a term coined by John Spies).

At noon on the 12th, we began climbing the ropes and heading to the surface.  It was a long process and the team reached the car by 19.00, a total of 33 hours underground.  The entire team exited safely and without injury.  We didn’t make it to Burma and that is ok.  Working as a team, we witnessed natural history, exotic life, and saw things no other human has ever seen.  We learned more during our journey than we could have possibly imagined, and created lasting relationships.  The excitement of exploring the unknown teaches us to take risks and encourages us to grow.

Special thanks to LED Lenser for providing ultra bright lights to be used in the cave.  Petzl America also gave strong support on caving equipment which allowed us to bring a much larger team than usual.